We have implemented an improved and even free to try version of the on-the-fly background removal transformation. Doc here

A new and faster version of the warm-up API have been developed, to meet all your dynamic needs for images' cache renewal. Doc here

We added a series of 4 "most used shortcuts" for your convenience at the top of the home dashboard, along with a dedicated place for latests offers and free trials you can benefit from.

You recorded a request to have an additional language available for the admin interface, and we want to speak your langage. So in this case, noi parliamo italiano!

Cloudimage now natively compress the SVG files, on-the-fly, without perceptible quality loss, to an average of x50 size reduction. Simply activate the option in your Admin interface, under "Image Settings", or add svg_minify=svgo in the URL. Doc here

Users will be able to remove the background of a product image to replace it by a colour/white/black background for example. It will be requested with a URL parameter. Doc here

AVIF images are now available as a standard option (for compatible browsers). This is an asynchronous process so the first request will return the next best format while the AVIF is created in the background, to be sent on the following requests. Doc here

We reviewed and described all measurements available in the "Stats & Logs" and added the precise description of the measurements so you can tell exactly what is looked at, and of course request additional measures should you need them. Doc here

You can now shrink the size of animated GIFs and even convert then on-the-fly to animated WEBPs. Enabling lossy compression for GIFs (an algorithm designed to reduce the size of GIF animated sequences with minimum quality loss) is also an option if you wish to keep the animated GIF format .

The billing was displaying misleading message/button for Direct Debit payment type, and sometimes details were not visible even when this method was selected.

The Statistics dashboard had been updated to include a summary page totalling the consumption for all tokens in the account, provided the account is multi-tenant and the logged user has rights, and Summary in Home had been added, to give an overview of the last 30 days.

We added the possibility to use the most recent token configuration on the Magento x Cloudimage plugin, no need to contact the support to remove the v7 part of the URL, now. simple switch in the plugin administration page allows you to use any token with a simple click. Doc here

You can crop out automatically a face if present in the picture. The cropping will cut out (hide) AI-identified faces, on the fly. Doc here

From onboarding to quick-start, we redesigned the experience to be faster, easier, and bring more insights on how to use Cloudimage. Restart the onboarding or simply click on the quick-start link that appeared on your admin panel!

We added a summary dashboard allowing you to list and see global statistics across all your tokens at a glance. Let us know what additional information you'd like to see summarised there.

We added support for 0.xyz format percentage in the popular "gravity" function of the Focal Point Crop. Doc here

You have to possibility to automatically and on-the-fly "flip" your original images, in any or both directions. Doc here

We optimised the generation of new image variants generation by removing intermediate steps to gain x2 speed of display time for the first call.

We added a compatibility mode in order to use Sealing in v7 as it was in v6 URL syntax. Doc here

Faster, personalized onboarding experience along with an "all you need to know" Quick Start guided tour to make sure you have everything you need for starting your accelerated images' journey.

You now have additional information regarding token use and statistics on the home page to help you manage even more efficiently your Cloudimage delivery platform.

Published and improved version of the Cloudimage x Wordpress plugin with more parameters and options to fine tune your connector.

Added metrics and links for most seen errors 5xx and 4xx in the "Stats & Logs" general menu.

Published the latest version with JS mode improvement, and a remove v7 in URL toggle switch.

Preparation of upcoming changes to add granularity in user's role, added action to promote a user to owner (and make the requester an Administrator). 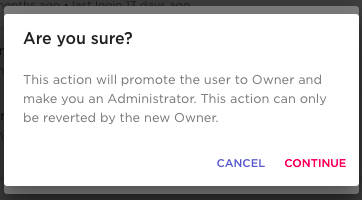 SLS target URL and other configurations fields are now checked for valid and/or necessary information at validation.

Fixed a wrong behavior that overwrote to English some existing translations (menu items in other languages) of the interface.

Improved the Watermark tab to see the actual effect of current setting for static and dynamic watermarking, and restricted background colors to the ones displaying accurately.

Added Y axis spin and possibility to change icons styles, as per GitHub request. Improved support for zoom with mouse wheel and touch screen pinch, as well as auto-play on mobile. Solved some misbehavior of image resize when resizing window. All details here.

Improved flows of flushing in scope "original", for some of the CDN providers. Doc here

The Admin "Stats & Logs" dashboard is now showing the entire selected period instead of a timeframe limited to the 5th of August. The "referrers" table have also been improved to show the latest data instead of the overall global.

Added capability to edit an existing custom CNAME and regenerate the TLS certificates.

The whole interface have been translated in Spanish, so yes, está disponible en español. And we will add more languages very soon, stay tuned and let us know which ones you are missing or want to contribute to!

Added functionalities of full-screen magnifier and zoom with mouse-wheel. Modified behavior as per popular request for autoplay and scrollbar. All details in the doc here.